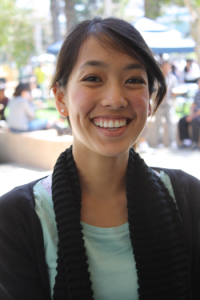 “I’d like to dedicate this blog post to those who might be interested in being a part of a project that could possibly change the course of history for all women in the United States.”

I had the pleasure of working on the ERA Education Project for sixteen weeks and I have to admit I was skeptical about this project when it was first introduced to my class at the beginning of the semester.

The fact that this project launched at ground zero and was piloted through my class, I was hesitant to work on something that might not even count towards my GE’s or units that I needed to transfer out of SMC. The worst part was that this assignment required me to work with group members. I felt as though high school was starting all over again and I would end up being the student who had to revise, edit, and do most of the work while other members slack off.

The most important thing that I took away from this experience was having the honor to have guest speakers come to class and talk about their personal struggles with feminism and ways of countering sexism, classism, and patriarchy through their works of activism in the field.

Many of the speakers we’ve had are celebrities themselves, such as Zoe Nicholson and Jennifer Lee who contributed to the second and third wave.

I don’t think I would have been able to embark on this project seriously if it weren’t for the individuals that came and shared their personal struggles as a woman trying to pave the way for equality for all women in the US.

Her presence caught my attention because it dawned on me how important the ERA Education Project was. I realized that women in second and third world countries are far more oppressed than women in the United States.

Women Studies is a subject that invisible to people on the other side of the world. The subject isn’t taught in college or universities and there is no such thing as women’s rights because certain countries feel that the men and women are equal under the law so there is no need to have a subject devoted to women’s history or women’s rights in school.

In the United States, Women’s History is mentioned minimally in primary and secondary school but it isn’t concentrated on until college level. I looked at the bigger picture of the ERA Education Project and realized that if women’s history expanded in the United States, other countries might look to our country as an example and provide education that focuses on women’s rights and their achievements throughout history. Women’s rights in the United States also have a larger platform among younger generations than it does on the other side of the globe today.

My favorite field assignment by far has been video interviews. I found this task most beneficial to me because it required me to work with new media and learn programs such as Handbrake and Slide Show Pro.

On the field, interviewing random people was challenging for me at first because I had to overcome my fear of speaking to strangers and asking them questions that are personal and could stir up frustration in their faces.

Most recently, I was assigned to interview thirteen random people about whether or not they believed that all Americans should have the right to contraceptives. The responses I got from participants were a learning experience for me. Interviewing people is more hands-on than working with social media, research, and curriculum development. It was more engaging and relatable for people to talk about, especially teenagers, because many of them are using contraceptives and struggle to get access to birth control from crowded Planned Parenthood centers.

Ultimately, this experience was my first step towards activism. Going back to what Abdou described in her experience at a University in the United Emirates, she explained that universities with women in the demographic taught their curriculum through the lens of a male discourse. I believe that that perspective still applies in the United States largely today. Something needs to be done and the ERA Education Project is a testimony to education; women will no longer remain unheard or unaddressed anymore.