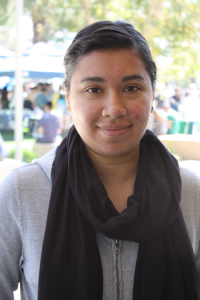 “I plan on using the skills that I have acquired during this semester to try to create change, awaken people and raise consciousness to the injustices and inequality that we are surrounded by.”

My experience being in this class and working on the ERA Education Project has been amazing. Since I took my first Women’s Studies class I was constantly trying to figure out how I can put everything that I had just learned into play and start creating change to the way women have been treated throughout the years. I would like to thank the ERA Education Project for giving me a chance to fulfill this yearning I had to help others and teach others about the forgotten history of women in the United States and to bring forward current issues of inequality to the limelight.

The assignments we were completing in class were truly instrumental in honing in skills that I thought I didn’t posses such as interviewing and speaking to people and even complete strangers about the current situation of women and listening to what they had to respond. Through that interaction my group members and I were able to open up the conversation regarding equality and the lack thereof and help shift their views and beliefs of what they thought was reality.

Doing research on past social campaigns such as the NOH8 campaign and the Obama Presidential Campaign helped me understand how the PR system works and what it takes to have a successful campaign and through those campaigns spread the word of their organization or agendas and get their messages across. I enjoyed applying all of the research we had acquired from the previously mentioned campaign and proposing similar and new campaign techniques for ERA Education Project that would propel the message to a mass audience.

In class we also developed a curriculum that will be implemented in a middle school in Lennox, CA to begin to teach women’s history and spread the word on the ERA to the younger generation and our future leaders. As we all know women have little to no mention in regular US History books and the ERA Education Project is trying to change that. With the 10 lesson curriculum that we made in class, students will get the opportunity to learn a forgotten history that is of importance because it represents a history of more than half of the population of the United States.

I sincerely believe if we start teaching about women’s history and their contributions to society and make it an integral part of every child’s early education, societal changes in favor of women’s rights would be easier to attain because the struggle and fervor of the women of the past would be no longer forgotten and assume its rightful place in the history books.

Along with working with the ERA Education project we had weekly visits of guest speakers who would come to our class and inspire us to create positive change in our communities and fight for equality.

One of my favorite guest speakers of this semester was Zoe Nicholson. Zoe Nicholson is an activist, writer, and all around awesome human being who spoke to us about activism and how all of us have the power to create change and be an activist. Zoe infused in us the idea of talking about the issues and problems that are in front of us. She said that just by speaking up or ones own actions we are an integral part of the movement and are activists. This kind of take-on-what-you-can-handle activism is one that is really appealing to most people including myself because it allows for us to create change or bring awareness to issues that would otherwise not be talked about. This is true with the stuff that we were doing and learning alongside the ERA Education Project.

For our social media assignments we were asked to promote and share the ERA Education Project’s Facebook page on our pages and try to get our friends to like the page, by doing this we were spreading the message to our friends in a way that was accessible to them and attractive enough for them to click on the page and investigate what it was all about. This small way of promoting the ERA page was and is a form of activism just as what Zoe had said to us in her guest lecture about taking on what you can.

I plan on using the skills that I have acquired during this semester to try to create change, awaken people and raise consciousness to the injustices and inequality that we are surrounded by.I plan on doing this with the advice that Zoe gave us of taking on the problem that is in front of me and finding my own definition of activism.