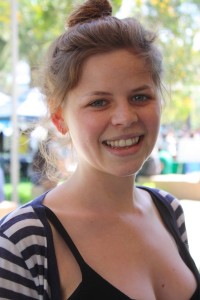 “I am so happy that I have learned this, because as absolutely cheesy as it sounds, I really do feel that I can do anything. If I want to see change, I can make it happen.”
Working on the ERA Education Project has been beyond an eye-opening experience for me. I don’t know if I fully understood (or believed) that literally ANYONE could make a positive change in this world through activism. Before I began working on this project, my idea of an activist was a slightly whacky extremist who ate, slept, and breathed the cause they were involved in. Now I know this is definitely not the case. I learned that activism can be as simple as sharing a Facebook page with my friends.

I also learned that spreading awareness is half the battle. So many people don’t actually know what ERA stands for… so activism could be a conversation about what it means and why it is so important to promote equal rights between men and women. Plus, it is extremely empowering to know that I could change someone’s way of thinking and their perspective on society, just by telling them what something is! Because really, sometimes the only thing holding a person back, is their lack of awareness.

Now for the most important aspect of activism… its ability to be present in everyday life. Simply by living as though the Equal Rights Amendment has passed, makes me an activist. After taking this course I realized that I don’t have to be leading a protest or a riot in order to be active. Rather, I can live with a political consciousness, and understand that the choices I make will affect those around me. (Again, a very empowering feeling!). I whole-heartedly believe that men and women should be economically, politically, and socially treated as equals, therefore I am an activist!

So that is what I have learned. Activism manifests in so many different ways, and they are all correct. Do what feels right for you because as long as you mentally involved and aware, you are being active! I am so happy that I have learned this, because as absolutely cheesy as it sounds, I really do feel that I can do anything. If I want to see change, I can make it happen.